I rode public transit today (always good for the soul) and had a chance to listen to some of the many podcasts that I’ve downloaded to my iPod. One I found particularly interesting was a recording of Larry Augustine’s talk at the Open Source Business Conference held in San Francisco in April of 2005.

If you want to hear the podcast yourself, you can check it out in iTunes — it’s Episode 12.

Basically, Larry argued two things — one is that large applications (CRM, ERP, etc.) are the “next wave” of open source development and the other is that the open source business model can actually lead to more profits than the traditional “broken” model of selling enterprise software for large license fees.

bdg already offers one product as open source — the PHP EDK, but this podcast made me start to rethink our model. Perhaps all of our products should be free and we should continue to make our money off services, maintenance and support.

I ruminate (publicly) on this topic in the third episode of the bdg Plumtree Podcast, which also covers the Plumtree->AquaLogic name changes.

With the acquisition of Plumtree by BEA in the books, all of the Plumtree products we know and love have received new monikers.

Here’s a cheat sheet to help you map the old names to the new ones:

I also heard (from someone on the inside) that no new releases of the newly branded AquaLogic family are planned until 2007.

I heard from someone on the inside that at noon on Thursday, October 20th, Plumtree officially becomes the AquaLogic devision of BEA.

Here I am just seconds after stepping into the Booth of Pain and before the booth was bombarded by projectiles and Silly String. 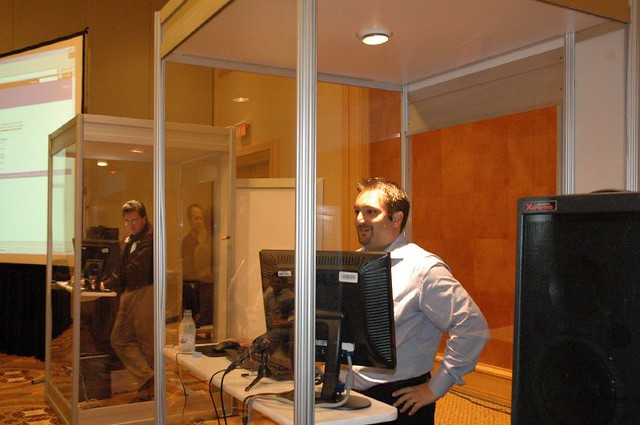 I figured I would post a picture before I started sweating profusely.

With a resounding victory this morning in the Booth of Pain, bdg put the wraps on what will probably be the last Plumtree Odyssey.

We sent five people this year: me (President & CEO), Eric Bucchere (Account Manager) and Rich Weinhold (Plumtree Developer) representing the East Coast and Howie Bagley (VP Sales & Service) and Steve Markoff (Plumtree Architect) representing the West Coast. We had the opportunity to meet many of you at our booth – thank you for stopping by and introducing yourselves! In the upcoming weeks we’ll be raffling off the iPod Nano that was on display in our booth. If you asked us to follow up with you, expect to receive a follow up call or e-mail in the next 2-3 weeks.

Although the official feedback has not been tallied up yet, the talk we gave with Wind River was standing room only and I personally received lots of positive comments including one person who said that our session was the highlight of this year’s Odyssey. Another piece of feedback I got from Jack Jones of DTIC was that without our training (given in 2004), they would have gotten nowhere with their Plumtree project.

Winning the Booth of Pain competition was the icing on the cake. Despite the heat, the claustrophobic booth and numerous distractions from David Meyer (including scaling my booth, firing projectiles at me and scrawling the word “LOSER” across my booth with Silly String), I was able to compile and assemble the PTMingle application in about 25 or 30 minutes and then give a demo, which was very well received by the audience. In a humorous moment, I clicked on a del.icio.us hobby link related to “Romance Novels” and it displayed a half naked, hunky long haired dude with a cheesy smile (think Fabio). I quickly closed the window amid quite a bit of laughter from the audience.

PTMingle at this point is no more than a concept application/prototype, but expect to see the code used in the Booth of Pain competition up on the Code Share within the next few days. Plumtree data visualization in hyperbolic trees, profile integration with del.icio.us and Google maps integration are all hot topics right now and all areas of interest that bdg would like to pursue, so you should keep an eye out for more offerings from bdg that exhibit these features.

In closing, I wanted to send a resounding THANK YOU out to Yi Hong Xu of Wind River for her help with the presentation, to Mattias Cudich for plugging this blog during his Holland presentation (more on this later), to all of you who attended our presentation or the Booth of Pain, to all of you who stopped by our booth and last but certainly not least to the stellar team of bdg-ers who made this event a huge success for bdg.

On a personal note, this year’s Odyssey had a bittersweet feel for me. It was my sixth Odyssey, having attended four as a Plumtree employee, two as a bdg-er and missing just one (in 2003) and it will most likely be the last. We do, however, look forward to seeing all of you again next year at BEA World in San Francisco.

Look for more posts from me regarding the material presented at Odyssey, especially on Project Holland, which has exciting implications for future BEA/Plumtree offerings.

We’re going for a big splash this year at the final Odyssey+ADC while Plumtree is still, well, Plumtree.

Plumtree just released the onsite guide showing bdg in several places, so I figured it was time to announce our plans for this great user conference, which takes place Monday, Tuesday and Wednesday of next week.

For starters, we’re sponsoring at the bronze level, which includes a booth in the partner pavilion. At the booth, we’ll be handing out bdg mouse pads, marketing literature about PTSkinz and the PHP EDK, giving demos of PTSkinz and giving away an iPod Nano!

In addition to our booth presence, we’ll be co-presenting on Monday at 3:30 PM in the Regency 2 ballroom with Plumtree and bdg customer Wind River. The topic of our presentation is “Keeping it Simple: Best Practices in User Interface Design and Customization.”

Lastly, we’ll be competing in the Booth of Pain, a coding competition that will show attendees how to assemble a composite application in Plumtree from source code. That takes place at 10:15 AM on Wednesay in the Diplomat 3,4 & 5 ballrooms.

Please stop by our booth, pick up a free mouse pad, register to win an iPod Nano and join us for our presentation with Wind River and/or the Booth of Pain.

We look forward to seeing you at Odyssey!